Digital twins have been around for longer than most people think. But since their inception in David Gelernter’s 1991 book Mirror Worlds, and first implementation in 2002 at the University of Michigan’s Society of Manufacturing Engineers, a lot has changed. Next generation digital twins allow you to not only model and visualize a business asset but make predictions, take actions in real time, and use emerging technologies such as artificial intelligence and machine learning to augment and act on your data.

The problem is even though digital twins are deployed in production environments today; they lack the capability to take actions in real time. In other words, they are simply a fancy dashboard. Where the real power presents itself is when digital twins are combined with real-time event-driven architecture to create a fully augmentable, real-time visualization of any physical object/space. Below are six of the ways next generation digital twins will transform business.

Bridge the Gap Between the Real World and Digital Systems

In the past, all business operations and assets have been siloed from each other (both physically and digitally); mostly due to the way in which traditional systems are developed (database centric model/three-tier architecture). By shifting to a real-time event-driven development approach you can quickly and effectively integrate all your systems to get a more accurate and interactive model of the real world.

A hypothetical example of this is a cutting-edge smart city we will call Gotham. Gotham has a lot of the same systems in place that any modern city does: smart traffic lights, GPS tracking of its fleet/emergency vehicles, a citywide electric grid, etc. What Gotham has that other cities don’t, is a real-time digital twin, ingesting, analyzing, and correlating data from all the different systems across the city. This has major benefits on both the development and operational fronts.

From a development standpoint an EDA (event-driven architecture) approach streamlines the production of new applications and changes to already existing applications. Instead of having one digital twin/application that you continuously update with new functionalities; by developing different applications (such as the smart traffic lights, GPS tracking, and electric grid discussed above) separately from each other and connecting them via a platform like VANTIQ you avoid a lot of possible complications during that applications entire lifecycle. For example, when an update needs to be made to one part of the system the entire thing does not need to be taken offline; or if a malfunction happens only a portion of the smart city system is affected.

On the operational side, being able to correlate data streamed from smart traffic lights to route emergency vehicles to an accident via the quickest route is one example of how distributing your operations with EDA allows systems to share data and work together in ways they couldn’t before. This cross-pollination of data is what will allow previously siloed business operations to work together in ways we never thought possible.

Being able to take in data from an edge node, such as a camera or other sensor, and immediately see the live data on your digital twin opens up a world of possibilities. In the past, digital twins were created to model a machine, such as a motor or medical device, during its product lifecycle. But now with real-time event-driven technology it is possible to model an entire environment instead of just a singular device/business asset.

A recent example of this is SoftBank and VANTIQ’s Smart Building initiative. A digital twin of SoftBank’s lobby was created, allowing for identification of individuals who enter the building and real-time tracking of any person of interest. If an unknown visitor is detected, they are immediately flagged by the system and their location is marked on the digital twin of the building. As the person moves through the building other cameras detect the individual, are alerted this is a person of interest, and immediately update the location of the individual on the digital twin.

In the past a digital twin of a building may have monitored building HVAC systems, elevators, fire alarms and other pre-built assets. This is great, but it only addresses a fraction of what actually goes on in a building; in today’s fast pace business landscape you need to have full operational view and control of every business asset. 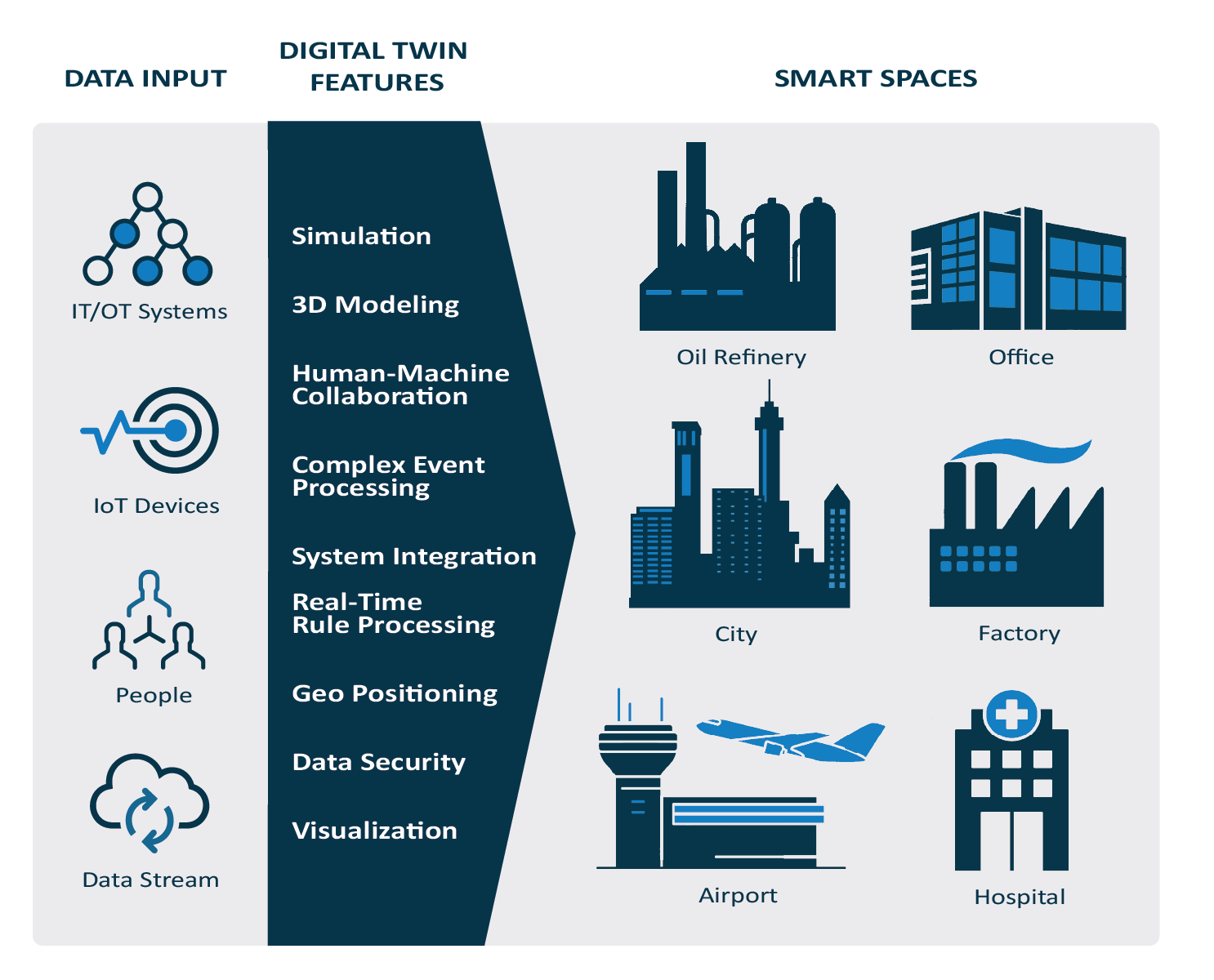 The speed of business and technology is increasing at an exponential rate and shows no sign of slowing down. Having to call a database to make a critical business decision doesn’t work anymore in a world where seconds (sometimes milliseconds) count. The next generation of digital twins will inherently have real-time capabilities because they must be built on an event-driven framework in order to be successful and useful. Digital twins of the past have been nothing more than fancy dashboards; which are great to visualize problems going on but lack the functionality and intelligence to suggest solutions, correlate data spanning multiple business units, and show changes in state immediately rather than when it is already too late.

A great example of this is the project that supermajor oil & gas company Total is working on with VANTIQ. One of the biggest concerns for Total on their various refineries and production facilities is the safety and security of workers. To address this concern, they have begun to implement TADI, Total Anomaly Detection Initiative. Using a real-time event-driven digital twin of their refinery Total is able to detect events such as a gas leak and react much quicker than was previously possible. The video below explains this project in greater detail:

Machines will control the world. This phrase is said a lot today, and while there is some truth to it, here at VANTIQ we don’t see the future as one where machines are the sole source of productivity and innovation. VANTIQ CEO Marty Sprinzen says:

“The first generation of information technology automated the management of data in organizations for efficiency, the next will control, in collaboration with humans, how the world operates.”

Humans still need to be in the captain’s chair. A machine cannot replace the human instinct and complex decision making that is required in high stakes situations. Instead, real-time event-driven digital twins will be used to enable the most effective human-machine collaboration the world has ever seen.

Let’s take our oil & gas example from above; when a situation of interest arises (such as a gas leak) a notification is immediately sent to the control room where the operator is monitoring the digital twin of the refinery. A suggested course of action is displayed, and the operator is given the option to proceed with the recommended action or override the system if a different remedy is appropriate. While this interaction between the operator and digital twin is taking place the system automatically sounds alarms and notifies workers via a mobile alert to evacuate the area surrounding the gas leak. If all the operator had was a simple dashboard (what previous/current generations of digital twins are) the rapid response outlined above wouldn’t happen anywhere near as quickly. When lives are on the line, having the ability to act and react in real time can mean the difference between life and death.

One of the biggest struggles facing businesses today is the rapid change in technology. There is nothing worse for a development team than to finish a long and arduous project only to find out requirements have changed, and they need to go back to the drawing board. Thankfully, VANTIQ’s event-driven architecture allows for flexible digital twin models that work in coordination with one another or are even nested inside one another.

It’s easy to see how developing your end goal (in this case a smart building network across Tokyo) piece by piece is easier from an initial development standpoint. This approach also has major benefits when problems occur with the digital twin or changes/updates need to be made. You can imagine how much of a nightmare it would be to make changes to an entire integrated smart city network all at once without introducing bugs into the system or having to take everything offline to push the update. Instead, the update is made on the nested digital twin (just the lobby or cafeteria module of the smart building digital twin) and there is minimal to no negative impact on the entire system.

By moving to a distributed development approach and interconnecting all of the applications you are able to rapidly evolve your business and respond to threats and opportunities faster than ever before.

Enables the Use of AI, Machine Learning, Object Recognition, and More

There are so many new and innovative uses for the hot technologies of today like artificial intelligence, object recognition, machine learning, and many others. The problem is being able to quickly and effectively integrate these, usually very complex, technologies into your product/service. By using a real-time even-driven digital twin you are able to build a virtual framework that coordinates complex events across space and time. When it comes time to add a new technology to your business there is already a plethora of data and functionality built-in to your digital twin from the other systems you have already created. This makes the process of implementing new technologies much easier and faster than ever before.

This ability to easily integrate previously inaccessible (or very hard/time consuming to connect) technologies into your application is an insanely powerful benefit to creating a next generation digital twin. Being able to call these technologies when you need them will make developing the next generation of applications and digital twins quicker, easier, and cheaper than ever.

This blog just brushes the surface of how digital twins combined with real-time event-driven architecture is going to change the world. Download our brand new whitepaper, Digital Twins Will Drive the Future of Digital Transformation, and dive deeper into the evolution of digital twins, the worldwide business opportunities they open up, how they can integrate emerging technologies, and more!

Have a thought for an interesting blog on the topics of real-time business, digital transformation, event-driven applications, human-machine collaboration, edge computing, Internet of Things (IoT), or high-productivity/low-code development? If so, send me a note: [email protected]