To Transform, Get Out of the Classroom

Raj Raheja, CEO and Co-Founder of Heartwood, was a guest on VANTIQ TV’s The Real-Time Enterprise. Heartwood is a truly innovative company that provides virtual 3D interactive simulations and guides for operations and maintenance personnel.

Recall our earlier interview with Jordan Mayerson, the CEO of Hoplite. That makes this episode the second in our series of interviews with entrepreneurs who are bringing truly transformative solutions to the market.

Blaine: How did you get to the point where you realized Heartwood was the way to go?

Raj: When I was really young, I really loved art. I was an artist by heart. I went into architecture, actually, my first love. So, I absolutely adored anything that was visually extravagant. In the process of architecture, I actually discovered 3D graphics because this was in the 90s/mid 90s and really cad/cam 3D graphics. I was fascinated that in architecture school, we could walk through a building before even building it.

Starting from an animation company doing visual effects, I started Heartwood with Neil, my co-founder and we went from animations to simulations which pretty much, in layman’s terms, is saying we went from movies to games. So, instead of seeing something that plays 50 times the same way, we love the fact that simulation or games, if you will, is very unique to the user. I think for us, that was euphoric and we said, “This is a whole new world about to open up: the world of interactivity, the world of using gaming technology, even if it wasn’t for games.”

Blaine: It sounds like to enable these use cases, somebody has to build a digital twin of the mechanical system that you’re going to be trained on, or whatever the system is, and then you do your training on that virtual twin of the actual physical system. Is that correct?

And actually, the name digital twin is the exact name you want to give it in digital transformation. Obviously, you’ve done your homework. The digital twin will have a lifecycle even beyond just training because training is just learning the job, but that’s just not the end of it. A lot of training organizations would think that the goal is to deliver better training, but that’s not the goal. The goal of the goal, really, is to have the task done better, faster, and without errors. If you can reach all those three conclusions, that would be great. It’s not really about the technology. It’s about the user.

It’s not just training for us. We think training is just learning the job and then there’s doing the job. The digital twin strategy can move all the way from a training classroom – this could be on PCs, iPads, or even virtual reality like you’ve been hearing about – to on the job. This could be on their phone. We are preparing for that world where the transformation or rather the movement of this content or knowledge from learning to job to doing the job is seamless. It’s the entire digital twin all the way to the last point of access which is right when they do the job.

Blaine: Do you have an example of a customer where they implemented the solution and it truly did transform their operations in some fundamental way?

The one I like to bring up is Norfolk Southern. Norfolk Southern is a premier brand in the railway industry. Because of federal guidelines, they have to test and evaluate whether someone can do something called the airbrake. This is literally done every time the train stops and has to move again. The frequency of it is a lot and it’s horizontal, company-wide. Everyone has to know how to do it. What they’re doing now is they’re applying to get a waiver that instead of doing it in real life, we have them in simulation and actually gather far more information than we could do before.

Blaine: So, this is one of my favorite parts in the conversation where I get to ask gusts what part of conventional wisdom they’d like to call BS on.Is there anything that comes to mind in that regard?

The one thing I like to say is that if you pick up any report, any industry report on AR/VR, and they will always say the lowest hanging fruit is the use case around training, field services, or something like that. Then, what we see is a bunch of companies [trying to implement those solutions].

Any one report that talks about AR/VR as one thing, to me, baffles me because it has to be additive in the whole lifecycle. It cannot be any one thing on its own. For us, the problem is really learning and doing the task faster, better, with less errors. To do that, you’re going to need everything. It’s not just AR/VR. It’s going to be all of the above. I call BS on that because these are technology-led use cases. Instead, they should be problem-led. 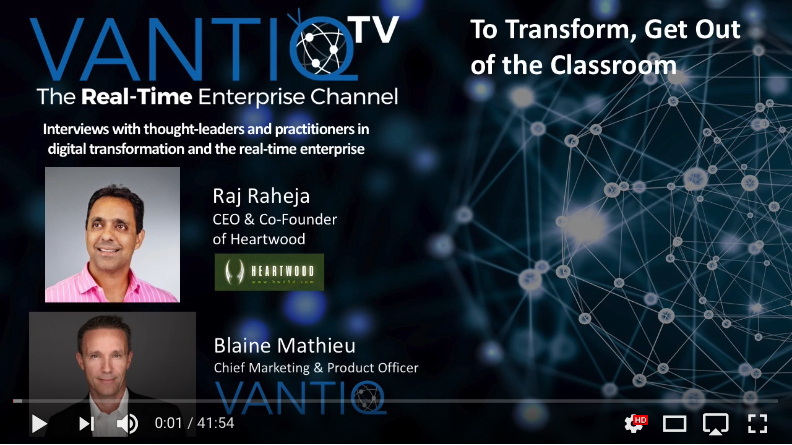 To view episodes from VANTIQ TV, go to vantiq.com/tv and let us know what you think at [email protected]. To learn more about Heartwood, go to https://hwd3d.com.