Professor Hiroshi Esaki, Computer Science and Technology professor at the University of Tokyo, was a guest on VANTIQ TV’s The Real-Time Enterprise.

Professor Esaki is one of the most well-known experts in the Japanese information technology industry focused on core Internet technologies, now also including IoT, smart cities, big data, and many other topics. He’s a member of many industry groups and bodies and he is also formerly chief architect at Toshiba Corporation. To see his website, click here.

Blaine: Professor, why don’t you start telling us a little bit more about what you teach at the University of Tokyo and how you help advance technology in Japan more generally?

And also, I, myselfam working and leading one of the best industry/academia consortiums called WIDE Project: that’s Widely Integrated Distributed Environment. It was established 30 years ago.

Professor Esaki: That’s thanks to the Toshiba Corporation. I was an engineer at Toshiba Corporation working in MPLS. They allocated me as a chief architect for the MPLS project at Toshiba. I met with professor Jim Marais, a very famous guy globally. He is called the father of the Internet in Japan and also called a samurai. He did a lot of work with Vint Cerf, actually.

“The Internet is not only the technology. But, also there is a principle, a discipline how to make a system from the architecture point of view. Once we introduce those Internet genes into the building and interest in the smart city, smart community, or smart globe, a very different system is going to be built.”

Blaine: Very, very interesting. Thank you for that background. What particularly excites you about what’s going on in Internet technologies today?

I realized the very first stage of the Internet was only the web, just for the engineers or scientists. We had the Internet service provider. Then, that goes to the platforms for business people.After that, we have SMS [instant messaging]. That is for the people. It was five or 10 years ago. Then, we are going to IoT: every single device is going to be connected.

Also, when we think about industry, our area that the computer is covering,used to be the IT industry only. Now, we are covering all industry: construction, transportation, etc. An interesting symbol is the smart city. We are going to build all of the city based on the IT technology.

The Internet is not only the technology. But, also there is a principle, a discipline how to make a system from the architecture point of view. As you mentioned, everything’s got to be connected. That is the kind of geneof the Internet. Once we introduce those Internet genesinto the building and interest in the smart city, smart community, or smart globe, a very different system is going to be built.

Blaine: This is the part of the conversation where I ask you to maybe reflect on an area of conventional wisdom where most people are saying something and you actually think a little bit different. What might an area be where you think differently than most people?

Professor Esaki: One very interesting [thing] is when we talk with the embedded system engineers, they don’t know internet. Even they don’t know about operating systems. They have their own world. They never think about cybersecurity, for example. They never think of how to transfer the data to the cloud or to the other equipment. They always have been in their closed, own world. That is called a silo. 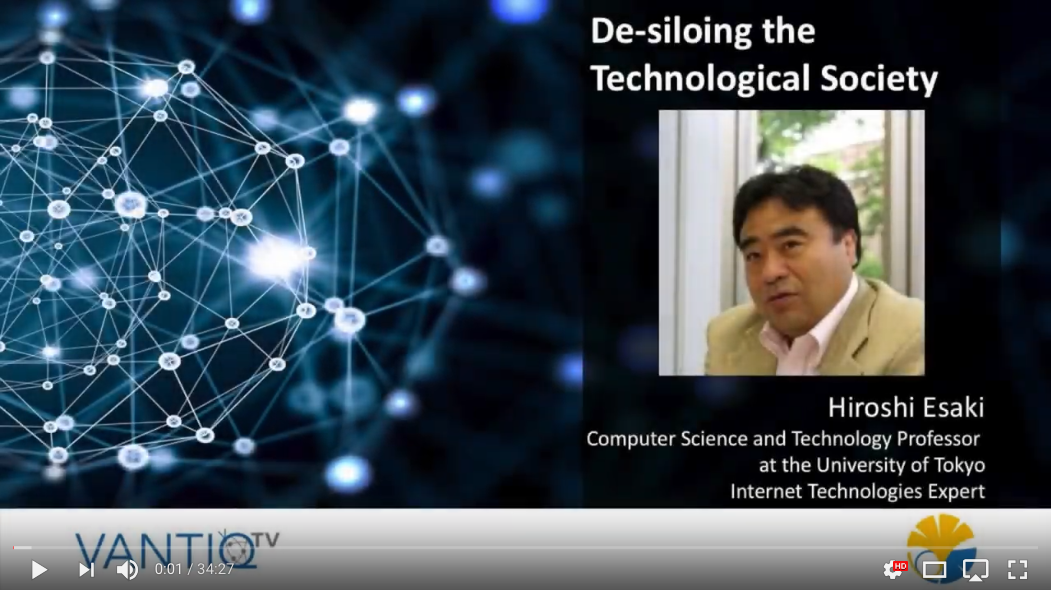 To view episodes from VANTIQ TV, go to vantiq.com/tv and let us know what you think at [email protected]. To see Professor Esaki’s website, click here.