Daniel Obodovski, Founder and CEO at The Silent Intelligence was a guest on VANTIQ TV’s The Real-Time Enterprise.

Daniel is an Internet of Things thought leader and a frequent keynote speaker. Prior to starting The Silent Intelligence, Daniel worked as Director of Business Development at Qualcomm. After leaving Qualcomm in 2013, he authored “The Silent Intelligence: the Internet of Things“, one of the first books about the upcoming technology which became a Top 10 book on technology and investing on Amazon.

What follows are some takeaways from the conversation. You can watch the complete interview here.

Blaine: I’m very glad we got this opportunity after speaking off and on for the last couple of years! Why don’t you start by telling us more about your firm, The Silent Intelligence, a very intriguing name. If I was naming a company now, I’d probably go for something exciting and interesting like that.

Daniel: Thank you. I’ll tell a little story on how we came up with the name. The Silent Intelligence is a professional services firm focused on digital transformation of enterprise. Essentially, what we mean by that is we help companies not just deploy technology, but also understand the problems that they’re trying to solve using technology.

Blaine: Enterprise data monetization has a soft spot in my heart because I used to run products and marketing for a company in that space. I’d love to know where you think organizations are at these days in terms of truly being able to derive all the value and fundamentally even monetize the data that they’re increasingly gathering.

The other area that’s been going on data monetization pretty fast I would say is transportation logistics starting with fleets.

“Now, you have the IoT data, all the sensors, and that’s just growing exponentially. You’re trying to pour water out of the boat, but more water’s coming. If nobody’s helping you, you’re going to sink.”

Blaine: We were actually recently at a smart cities event in the last couple of weeks. I’m really interested in learning more about what you are up to in the area of smart cities. Let’s talk a little bit more about what’s really going on there.

Daniel: In addition to The Silent Intelligence, about 18 months ago, we started a company in San Diego called ScaleSD (Scale San Diego). Scale stands for Smart Cities Accelerator Labs and Environments. The goal of Scale or the mission of Scale is to bridge the gap between technology and urban challenges or urban problems which range from traffic, transportation, parking, water, energy, but actually also things like helping undisturbed neighborhoods, addressing problems like homelessness, or digital transformation of the city of overall. You’d be surprised how many of these areas can be dramatically improved with data, with utilizing/analyzing data, applying machine learning algorithms to the data as the data volumes grow.

The thing is, what we quickly realized is the city has data coming at them with such a speed, they just don’t have the capacities or capabilities to handle all the data. Just think about that. They have the open data portals. They have the existing data that’s coming at them from whether it’s digitization of permits or blueprints or maps, financial budgets, etc. But then, now you have the IoT data, all the sensors, and that’s just growing exponentially.

You’re trying to pour water out of the boat, but more water’s coming. If nobody’s helping you, you’re just going to sink. And that’s unfortunately what’s happening with these cities. Cities need a lot of help not only processing data, but more importantly, applying this data to the urban challenges they have today which are very analog. They don’t have an obvious technology solution if you look at them. That’s the mission of scale.

Click here to watch or listen to the complete interview! 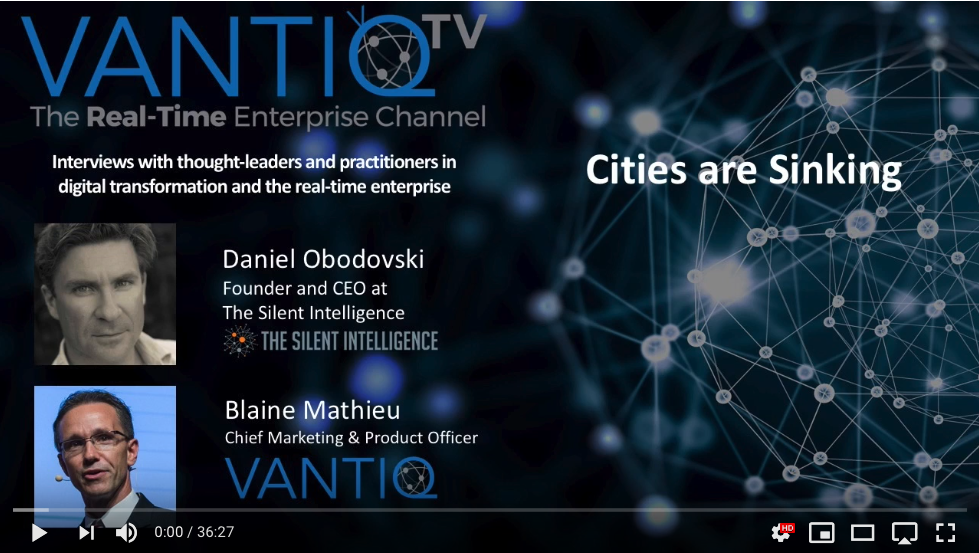 You can reach out to us anytime at [email protected]

Those interested in hearing more of Daniel’s thoughts should check out silentintelligence.com. You can also follow @silentintell on Twitter. Finally, check out ScaleSD.com to find out more about the San Diego smart city initiative that Daniel was talking about.